Longford town is a bright, bustling centre whose skyline is dominated by the historic St.Mels Cathedral spire. The town is home to several other fine buildings of architectural and historical interest including St Mels College, Longford Court House, The Masonic Hall, St Johns Church and the many beautiful private homes which line the Battery Road. The Market House, located in the old Connolly Barracks Complex, and currently in need of restoration, is Longfords oldest building having been erected in 1627 on the site of the O’Farrell Castle. It was the O’Farrell Castle settlement which gave its name to the town; ‘Longfort Ui Fhearghail’ meaning the ‘O’Farrell Fortress’.

Urban Retreat?The River Camlin flows through the northern part of the town where a delightful walkway along the river leads to the Mall Park, recreational area and sports complex. The park is an oasis of calm and tranquillity well used by local residents as well as visitors to Longford. At the opposite end of the town, walkers and cyclists can enjoy meandering or cycle along the pathway of the Royal Canal which leads to the quaint village of Clondra. The Royal Canal is now also fully navigable, along with the main line, from Spencer Dock in Dublin to Richmond Harbour in Clondra.

Longford has a fine selection of accommodation, award-winning restaurants, pubs and music venues, as well as some excellent boutiques and shopping outlets. Entertainment venues include The Backstage Theatre, ‘Engage’ Visual Artists Exhibition Centre, The Little Blue Room – Theater and Music performance space, Social Dancing Ballroom in The Longford Arms Hotel and Longford Cineplex. Preparing for an evening of socialising can be tiresome so it’s an added bonus to have a great Urban Day Spa in the centre of town, as well as several excellent hairdressing and beauty establishments. When the hustle and bustle of city life becomes too much then the relaxing pace of life in County Longford offers a restorative and regenerative breakaway. 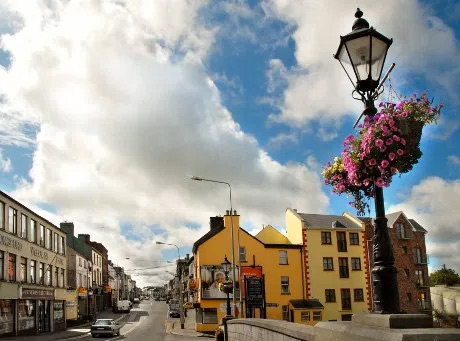 Central Location? Longford lies at a junction of main roads which lead to many of the major towns and cities of Ireland. Its accessibility to the rest of the country makes it a prime location as a holiday base. Dublin, Galway, Sligo and Mayo are all reachable within a short driving distance from Longford town. The town is also situated on the Sligo-Dublin train line as well as a variety of bus routes. So there’s no excuse not to visit!

Further information on County Longford can be found on the ‘Explore Longford’ App available to download for both Android and Apple Devices: